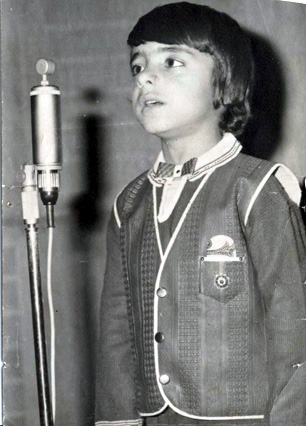 It was from the age of six that Jawid Sharif began his lifelong love affair with music. Over time his artistic talent grew, nurtured through the guidance of his beloved Uncle and mentor Habib Sharif. Habib Sharif noticed early on that his nephew had talent and helped him to practise and grasp the fundamentals of music. Sometimes, Jawid accompanied his uncle at events. In addition, Jawid Sharif took professional lessons with Indian classical music teachers.

Jawid Sharif had the opportunity to take part in his first radio broadcast at Radio Afghanistan. This feat was repeated, this time under the auspices of Zahir Howaida. He was also one of the personalities who encouraged Jawid in his music. Jawid’s precocious talent developed, resulting in further media exposure through radio, concerts and live performances held at educational establishments.

Another aspect is that Jawid Sharif has not only prioritized his music career, but rather he also completed studies in Azerbaijan telecommunication engineering. Afterwards, he attended linguistic lectures with a focus on the Russian language and later became a teacher in that area. After a while Jawid Sharif continued with his music career in Germany.

Currently, Jawid Sharif is living with his family in Germany. He knows that his wonderful journey has progressed so far through the help and support of family, friends, and the loyalty of his fans whom he values and loves. Jawid would like to take this opportunity to express his sincere gratitude to all those who have made his music possible.